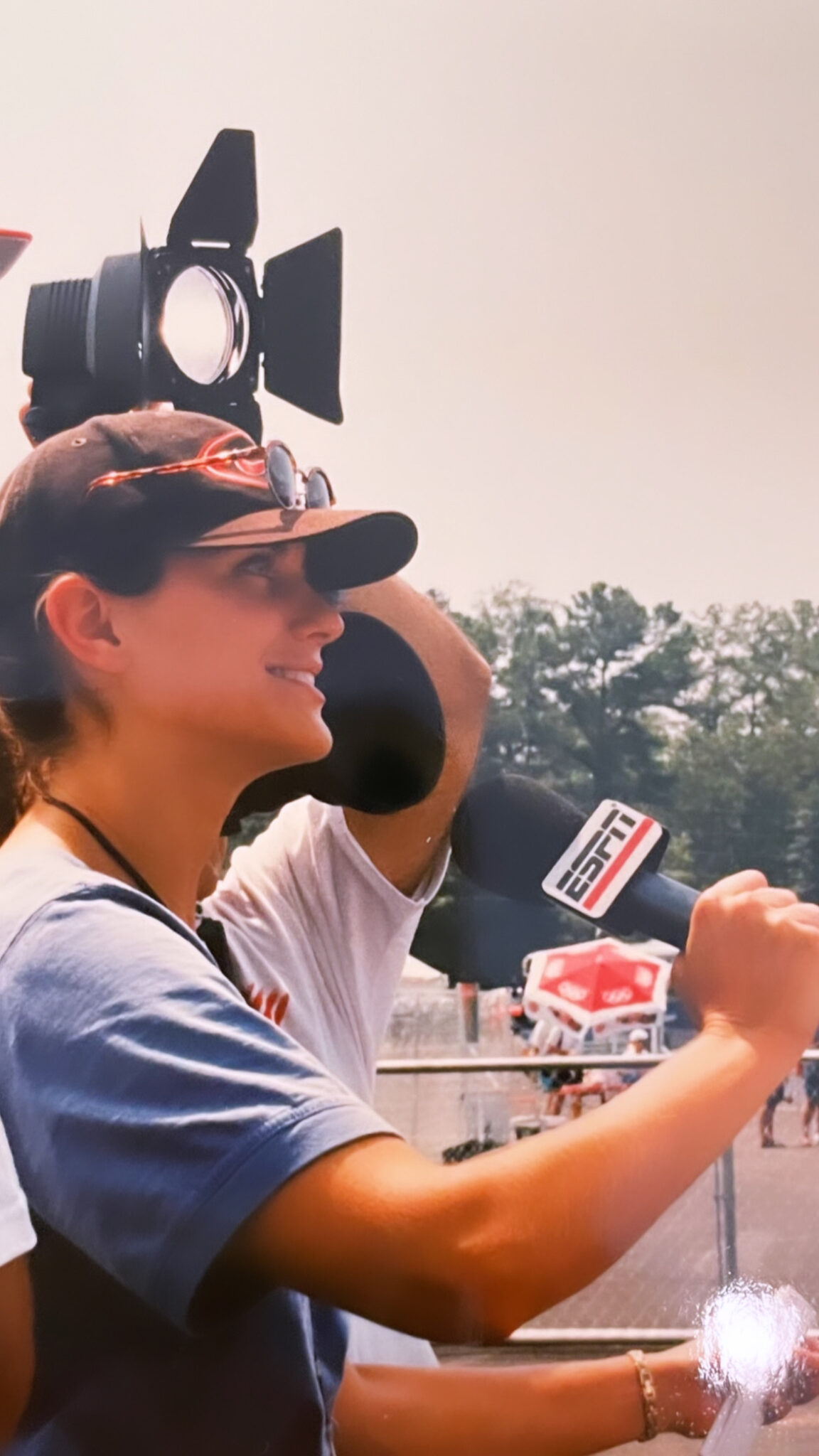 I think of him often.  Yet I didn’t even really know him that well.

In the early morning hours when my 8-year-old daughter stomps down the stairs, her feet far heavier than her 78 pound body would suggest, I think of him.  That is what I remember from his funeral.  Peter’s grandfather choking through sobs recalling how his grandson’s feet were always so heavy on the stairs.

Is it weird that I still think of him 30 years later?  It was a defining moment in my life.

Peter Rogot was a sports anchor at KCNC in Denver when I was a teenager interning at the local station in the hope of starting a career in television.  My memory is foggy with the details of the summer of 1988 other than recalling that there were two sports anchors I was shadowing.  “The nice one” and “the grumpy one.”  Rogot was the nice one.

Upon graduation from college I got a job at ESPN in Connecticut.  I was elated and worked my way from a temporary production assistant position to the assignment desk.  It was while I was on the desk that Rogot was hired by ESPN in the spring of 1991.  He was to make his debut in his dream job anchoring SportsCenter the following week.  He and his wife, Mary, had just moved to Connecticut.  They had recently married.  “The nice one” with a new wife and his dream job.  Good things did indeed happen to good people.

As a SportsCenter assignment editor, my phone rang constantly.  Reporters in need of a satellite truck or asking for a camera crew.  Random calls came in from celebrities like Bill Cosby or Dennis DeYoung from Styx asking if they could come by for a tour or to talk to a particular on-air personality.  I became adept at handling the harassing fans who would call complaining about the “unfair treatment” their team was receiving on the show.  The assignment desk was the main artery of the SportsCenter newsroom and as exhausting as it was, I loved being a part  of the action.

On April 9th, 1991 a reporter from our old station in Denver called the assignment desk asking for Peter.  I wondered if everyone in SportsCenter had yet met “the new guy”.  It was his sixth day on the job.  He waved at me as he bounced past headed toward the partition to his new cubicle.  Peter was an athlete, an avid cyclist, and in great shape at thirty-seven years old.  I transferred the call to his desk as he eagerly walked back to accept it.

It was only a few minutes later.  Five? Maybe eight minutes?  Someone came running around the corner frantically yelling, “Does anyone know CPR?”  There was always so much activity and noise in the SportsCenter newsroom that it took a minute to register.  “CPR? Yes, I know CPR”

I sprinted around the corner expecting to find someone, anyone else, in need of help.  But not Peter, yet there he was lying on the floor in a heap.  Several people rushed to help as we all surveyed the scene.  The phone was off the hook.   Peter had brought his lunch to work.  His sandwich was on his desk with a bite missing.  My co-worker and roommate, Peggy, was there too.  There were other people helping but I only remember Peggy and Peter and me.

We called 911.  I remember Peggy checking to see if Peter was perhaps choking.  Yes, that would have made sense.  Choking can happen even if you are thirty-seven and fit and starting your dream job and only been married a year.  Anyone can choke.  But no, there was no food in his airway.  We dumped out his bag looking for medications.  The 911 operator was asking questions and assured us an ambulance was on its way.   My hand was shaking so violently as I took things out of his bag that I had to place each item on the desk to actually focus enough to see what it was.

Peter was on his back on the ground.  Peggy was on his left side.  She might have been doing chest compressions.  I don’t recall exactly.  Peggy was composed and always knew what to do in any situation.  Then Peter exhaled – or it seemed like an exhale at first – but it was the most complete and final expiration of every bit of air and gas and LIFE in that human body.  I know this with every cell of MY body.  I later learned it is called a “death rattle”.  It leaves absolutely no doubt at all that an inhale will never follow.  Another breath will never happen.  Not for that body.  Never.

I looked at Peter but (this is difficult to explain) but he didn’t even look REAL anymore.  It was as if he was made of rubber, unrecognizable.

This is the part I remember vividly … and the reason that I still think often of him.

I was on my knees by his right ear talking to him.  “Peter!  Are you ok?  Peter say something!  Peter BREATHE!”  When I heard his voice – above me – and over my right shoulder – saying “you are so sweet; you don’t have to do that.”

Literally those words exactly.  “You are so sweet; you don’t have to do that”

I sat back on my knees …. What.   Was.   That???  Maybe I didn’t HEAR the voice so much as FEEL it. And that is when I knew that souls do indeed exist.  Peter’s soul had left his body.  Maybe you don’t believe me.  That’s fine … I don’t need you to believe.  I know FOR CERTAIN that souls exist and that is why Peter was unrecognizable.  His soul had left its container.

The ambulance arrived and took his body to the hospital.  I say, “took his body” and not “took Peter” because again, I’m certain his soul was already on its way … somewhere.  Perhaps the EMTs detected a heartbeat?   I have no idea.   I went to the hospital too.  I’m not sure why.  I don’t recall who else was with me.  Maybe Peggy?  What I do remember was Mary, his wife.  She arrived at the hospital in exercise clothes.  “Where’s Peter?” “I want to talk to Peter” she implored in a panic-stricken voice.  She was petite with dark hair and her shirt was damp with sweat in the small of her lower back because she had been out for a jog when someone got ahold of her and told her she needed to go to the hospital.  I remember looking at that sweat stain and thinking “she went for a run and came back to find her husband dead.  How cruel is that?”  She was taken into a room and I heard her scream.  I am in tears now, remembering that scream 30 years later.   It was deep as if it erupted out of her diaphragm.  Maybe even out of her soul.  That makes it sound too romantic.  It was anything but romantic – it was agonizing, intolerable pain.

I have never spoken to Mary.  I have never told her this story.   I have thought of her many times and wondered if I should find her and tell her that her husband’s soul left his body.  I have tried to find her but have been relieved when my efforts fell short.   I don’t want to upset her.  I know that sounds ridiculous even as I write it, but I wonder, what if that runs counter to her beliefs?  Maybe she doesn’t believe in the soul.  I didn’t believe until Peter.  She has already survived terror.   I shudder to think of tearing her wound open.

My brother came with me to the funeral.  The service in New York was packed to the rafters.  It was a blur of sorrow and stories.   I only remember Peter’s grandfather sobbing recalling the sound of his heavy feet on the stairs.

I decided then that if you could be thirty-seven and newly married and get your dream job only to have it all ripped away in an instant that I was not going to wait.  Later that year I got on a plane and began traveling everywhere my heart wanted to take me.  I learned to scuba dive in the Great Barrier reef in Australia, camped in the Serengeti of  East Africa, danced in the streets of Belfast, rafted rivers in South America, tracked gorillas in the Congo and placed offerings to Buddhist monks in Thailand all because I didn’t want to wait just in case it all got taken away.

Thirty years later the knowledge that nothing is promised beyond today still hovers in my daily consciousness.  When my daughter stopped breathing nearly nine years ago, I frantically tried to get her blue and lifeless body to take a breath.  After minutes that seemed like years she whimpered, then gasped and then cried.  Relief coursed through my veins as I watched her skin turn from dusky blue to an angry pink.  So, each morning when my daughter stomps down the stairs with those heavy feet of hers I still think of Peter. I rise to greet her, hugging her body a little too tightly as I remind myself that it is the container for her soul.