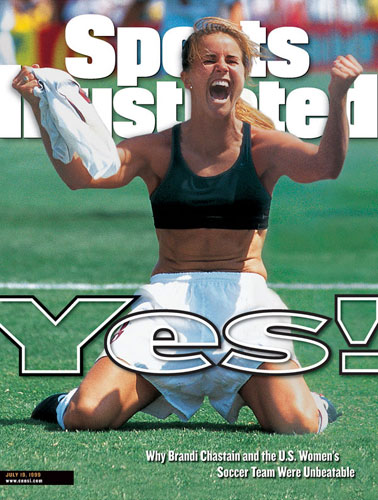 I am so tired of hearing men talk about domestic violence against women and then observe the same men objectify female athletes based on how “cute” they are. It happens all the time – they all know who Maria Sharapova is yet most cannot recount her ATHLETIC accolades. Do female athletes have to be sexy to receive attention from the male masses? Be honest – what was the seminal moment in women’s soccer? Winning the 1999 World Cup, right? But the image that comes to mind is Brandie Chastain ripping off her shirt . Dude, she didn’t do it to turn you on. She did it because she was excited, NOT to excite YOU. USA Women’s Soccer has won 4 Gold Medals in the last 5 Olympics. Right now a lawsuit is brewing because the athletes are tested like guinea pigs burning their legs on a playing surface that the men would never accept (look it up – I don’t have time to educate you on this one). Yet what much of the public remembers is a flash of skin 15 years ago. FIFTEEN YEARS AGO! When challenged to name successful female Olympians most men can spit out a line or two about 3 time Olympic Gold Medalist Kerri Walsh-Jennings. Maybe they don’t know her name but they could definitely pick her lithe 6-2 tiny-weeny bikini clad body out of a lineup. Speedskater Bonnie Blair has won six Olympic Gold Medals … know her? Yeah – didn’t think so. I’m not BLAMING you for not knowing – I’m not blaming you for recognizing an attractive woman either but there are some damn amazing athletes that deserve your attention regardless of whether or not you think in a different life you could bed them. Do we have to slap some lipstick on a WNBA player for men to determine she is worth watching? Would Brittney Griner get more respect if she was heterosexual with the blonde barrel curls we see on every sideline reporter under 35? Sadly, yes. We are all in an (appropriate) lather about Domestic Violence against women but there is a thin thread that ties together all the fragile ways women are viewed in society. Are women only to be protected but not necessarily promoted? Yawn. Hold the door open for me – I will hold it open for you too. I have four brothers, a husband and two sons … I would like to think they can appreciate genuine athletic talent and wouldn’t just notice if it only comes wrapped in a scantily clad maybe-if-I-met-her-I-might-have-a-chance package. Aren’t we there yet? 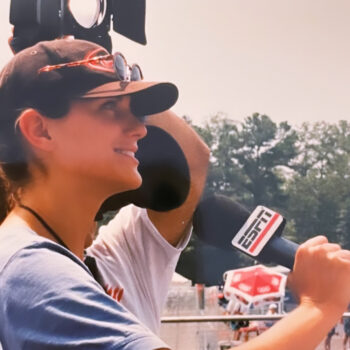